Pre-Order “The Art Of Saving Lives”, the forthcoming CD by Josh Johnston

Good things come to those who wait.

Shandon Records is pleased to announce the imminent release of my fourth solo CD “The Art Of Saving Lives”. Recorded in fits and starts over nine years with a supporting cast of friends and colleagues, the album features 10 original songs written to some degree or other by me and one instrumental. 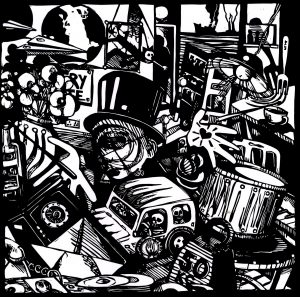 The album was begun in the Summer of 2009 in The Potting Shed, actually a house in Galway owned by my aunt loaned occasionally to me for recording sessions. Four musician friends convened to try a few musical ideas out. We had a great time and wound up recording backing tracks for 14 songs before leaving the house five days later. Not much happened after this due to life getting in the way but in the Spring of 2017, I was reminded of the recordings sitting on my computer and resolved to do something with them. After re-recording all the tracks featuring piano sounds (originally recorded on a keyboard) on a real piano, the lovely grand piano at Cauldron Studios (now sadly closed), I spent the next year hatching a plan. A cast of musicians was drawn up as well as a panel of collaborators to finish writing the bits of the songs still not finished yet. The first two weeks of January 2018 was spent finishing lyrics with Doug Kinch, SJ McArdle, Eoin O’Brien and Anna Johnston. Then the second two weeks were spent in my own house with Michael Manning recording vocals and overdubbing brass, reeds, strings and lots of guitars (there are five guitarists on the album). Lots of tea was drunk and lots of great music was recorded. In February, I worked with Anthony Gibney finishing off some vocals. Finally, the restored Dublin Unitarian Church pipe organ was put to good use to create something a bit special for five of the songs. Over five weeks, the album was mixed by Michael and Anthony, and mastered by David Montuy.  The striking print on the front cover – see above – was created by Limerick-based print artist Des MacMahon and the package was designed by Mark Conway at Born & Raised.

I am spending some time now sending review copies off to press and radio people – lots of them have it.  Feel free to request tracks on the radio.

I’m greatly looking forward to launching it with a concert at Dublin Unitarian Church on Friday 29th July followed by a short tour of Ireland.

You can see the video for the first radio single Lines here – thanks to Christopher Merton who devised and produced the video.

The album will be released on CD, vinyl and download. A few people have asked me how they can get their hands on the disc before it is formally released. I’m very glad to give people this opportunity – your pre-ordering the CD will certainly help the cashflow issues any independent musician faces when trying to see an ambitious project like this through to its release. Many thanks for your support. The pre-orders will be dispatched on Tuesday 5th June 2018.

There are 8 options for the pre-order – select whoever one tallies with your preference.  Options 2-8 include post and packaging. Once you have selected your choice, click Buy Now and enter your details.  All payment is handled through Paypal but you don’t have to create an account to pay this way.