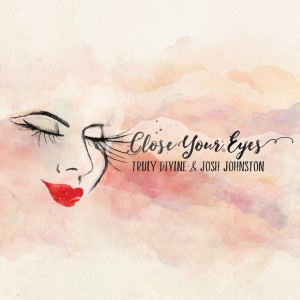 In the Spring of 2013, Dutch singer Truly DiVine and pianist Josh Johnston resumed a lost friendship and began working together on a string of successful shows along various themes. The first – Burning Love – explored the dark side of love through music and story and the shows that followed – Dietrich’s Angels, Dreaming Of Doris and Screen Sirens – focused on the music made famous by a succession of amazing screen icons. This year, they decided to record some of their favourite tunes from these shows, initially to send to venues and promoters. In the end, they recorded ten songs in four and a half hours and it was decided that as they were sounding so good, it would be a shame to only let the industry hear them. With another session, they would have enough for an album. That is what they have done.

The resulting collection, Close Your Eyes, was recorded in Cauldron Studios in Dublin with engineer Michael Manning and is a series of recordings of which they are intensely proud. From the tender, romantic It’s Magic (Doris Day) and Try Your Wings (Blossom Dearie) to the playful, cheeky Johnny (Marlene Dietrich) and The Heat Is On (Rita Hayworth), the disc is an intimate collection which gives an effect not unlike having Truly & Josh in your living room singing you gently through the night. You can hear some examples of this here

As it’s not ready for Christmas (the original plan), a new plan has been hatched to allow you to pre-order your signed copy (which will be posted to you a number of weeks before the official launch). In a Fundit-esque manner, they have decided you might like to contribute a slightly higher amount towards the production of the disc and if this is the case, they have devised a number of thank-you gifts for helping them, some of which – indeed – involve having Truly & Josh actually singing in your living room.

To pre-order the disc, please click on the paypal button below and be sure to select which option you would like. If you would like to donate a different amount (like €30, or €1,000), Truly and Josh are not averse to this – please e-mail josh@joshjohnston.com and he will tell you how.