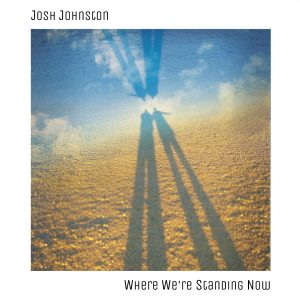 Where We’re Standing Now, Johnston’s 5th solo album, is made up of 4 piano solo improvisations recorded in various studios between 2013 and 2019. It is Josh’s 2nd solo piano album after The Shape Of Things.

“Capital City Dublin 1974-75” is an improvised score to a short silent film of the same name shot by Jim Mulkerns and Brendan Halligan depicting Dublin city in the mid-1970s. Shot in black and white, it shows the decay that was being allowed to develop in the city and is a portrait of a city waiting to be reborn. It was recorded in the now-closed Cauldron Studios in Dublin by Michael Manning in March 2014.

“Green Meditation” and “Letting Go” were recorded in 2019 as part of a collaborative project with English poet Mark Hutchinson. Mark read his poetry and prose and Josh improvised to it live. For some performances, they enjoyed the music without the words. A full-length recording featuring the duo in collaboration will be released in 2021.

“Where We’re Standing Now” is a recording of a concert performed in Dublin Unitarian Church in March 2013. The last date of the tour to promote the last piano solo album, The Shape Of Things, Josh used melodies and other elements of compositions from that album and his previous song album Asylum Harbour to create a free-flowing single improvisation. It marked a development for the songs and compositions, and also allowed him to take the listener on a musical journey uninterrupted by applause. It was recorded by Kevin Robinson.

Of the album, Johnston says, “While not at all what I had been planning to do in 2020 – an album of songs was in the works which will see the light of day in 2021 – I had also been looking for the right time to release these recordings. Sometimes you have to stop planning and let life do its thing. I’m delighted with the opportunity and look forward to hearing what people think.”

The cover design was created by Rob Molumby from a photographic composition by Marco Francescangeli.

To listen to tracks and purchase the CD from Josh’s Bandcamp page, click here.