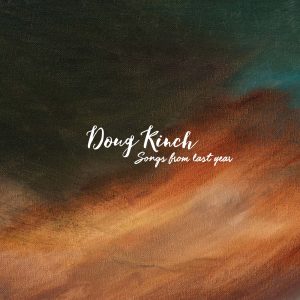 If songwriting is a vocation, it’s a late one for Dubliner Doug Kinch who penned his first song in his fifties. How it happened took him completely by surprise.

“It just blew in out of nowhere,” he explains. “I came down after a broken night, my head buzzing with lines, and started writing. It wasn’t a project. I’d had no intention – or expectation – of writing songs. It just happened.”

Two years on, his EP Songs From Last Year (some irony here) has been released as a taster for a full CD due early 2019.

Opting not to perform the songs himself, he’s instead collaborated with established professional musician, composer and producer Josh Johnston. The four tracks on the EP are sung by renowned Irish singer Carol Keogh.

“I liked the idea of a female vocalist singing the songs,” Kinch says. “Two were specifically written with a woman singer in mind anyway.” The songs delve into big themes and extreme states of mind – such as obsession (‘Hannah Jordan’) and loss (‘September Dry’) and also the life of the artist (‘Sketching for Lydia’) – all invoked by original music and lyrics that give these variations on the classic torch song genre a contemporary twist.

His collaboration with Johnston has proved fruitful. The pair took Kinch’s ideas for the songs and developed them musically, refining and polishing them over time to become the songs you hear on this disc.

Keogh’s subtle, flexible vocals and sweet, sometimes melancholy tones complete the effect and combine with Johnston’s arrangements to give the EP its distinctive sound.

To purchase, stream or download Songs From Last Year from Josh’s Bandcamp page, please click on the link..